After two cold mornings, -15° Monday and -18° this morning, milder temperatures are ahead. Highs are expected to be in the upper 20’s over the next few days as a coastal low moves up the coast of New England. The storm is far enough off the coast that it shouldn’t effect us other than a few flurries and some wind. By Friday we should see temperatures rise in to the low 40’s. Highs should remain in the 40’s throughout the upcoming weekend. 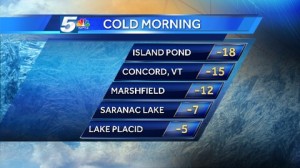